Please Note: Due to high demand there is currently a 4 week lead time on our kettles

Richmond Kettles are designed to suit any modern kitchen environment, even though the methods of making them date back 100 years. But as you’ll discover here, the history of the copper kettle and how it became a British kitchen staple stretches back even longer than that… 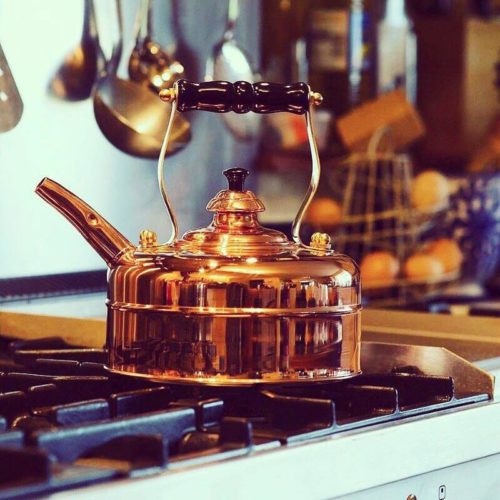 The widespread use of the copper kettle in Britain started during the Victorian era, when tea became readily and affordably available to the working classes for the first time. Previously, tea was considered something of a luxury, predominantly consumed by the wealthy. And as richer people could afford kettles made of more exotic materials, their kettles tended to be smaller, dainty and ornate items made of silver.

But as the British Empire made greater inroads into Asia in the 19th century, more and more trade routes opened for shipping. This made it easy and profitable for merchants to bring tea back to the UK and sell it to the wider population. However, regular people couldn’t afford silver kettles, and so needed an alternative made of a cheaper material that was also widely available and a good conductor of heat: copper.

As the popularity of copper kettles grew, manufacturers experimented with all sorts of different designs. Previously, what British households termed as ‘kettles’ were larger, almost cauldron-like items that were hung over fires to boil. As a result, many early models followed this philosophy with metal handles that allowed the kettle to be suspended.

But eventually, makers converged on the basic design principles that have made up the vast majority of kettles ever since: non-metallic handles to prevent the user burning his or her hand; a protruding spout to ease pouring; and a wide, flat base to make the kettle stable on a stove-top and help it boil water quicker thanks to a wider surface area in contact with the heat.

Copper kettles, therefore, were a practical success for homes throughout Britain in the late 19th century and well into the 20th century, too. But why has their popularity endured into the 21st?

Travel back 100 years and interior design wasn’t a common pursuit in the typical British household, and certainly not as far as the kitchen was concerned. But now, millions of people devote significant time and money into perfecting the look of their kitchens. And copper plays a huge part in that, as a relatively versatile material from a design perspective, and looks good in virtually any kitchen environment.

Copper kettles carry a dark enough colour to fit well into darker kitchen environments, but they can still shimmer and shine to complement lighter and more vibrant designs. They carry the raw-material look that works in more functional or industrial settings, but retain the design touches and flourishes to catch the eye in even the most contemporary or avant-garde kitchen.

All this is why copper kettles have pride of place in any kitchen: they’re stylish, they’re practical, they’re versatile and they tell their own story of centuries of British history.